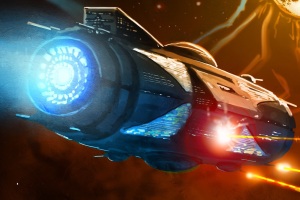 A vessel constructed at the Gravin’s Base drydock over Neptune, Unyielding Virtue is inextricably tied to Matt Garrison and the Year 200 Event.

A Venerable-class exploration cruiser, and the only one of its kind as of 200 A.T., Virtue is significantly faster, and more formidable on offense and defense than its contemporaries. It is also the first ship of its generation that can in any practical way, function independently of the accelerator relay network.

It is speculated that Virtue operates using a hybridization of ionic propulsion and a fusion-based impulse drive. In this model, base acceleration is accomplished by releasing of argon from secondary engine rings. Flash fusion of hydrogen and helium is converted into a vented plasma, the release of which is coupled with a repulsive microwave field that is responsible for majority of vessel’s propulsion, which is estimated to be capable of velocities as high as 9,136,155.70 km/h. Standard argon thrusters along key points of hull are used for vectoring.

The design matches standard configuration for most ships built in the Free Planets and within Consortium territories beginning in the year 160 A.T. Following this design principle, the engines are bi-directional, so the vessel in question can adjust course away from hazards or when moving too close to a world’s gravity without needing to turn. This also allows for system redundancy if one engine is to fail. The bulk of the vessel is symmetrical, rendering the decision as to which end is the front and which is the back, an arbitrary one. The ship has a total of eight solar/rad panels, covered by what appear to be exceptionally robust sheets of flexiglass.

Virtue is armed with a variety of turrets, including ion defense cannons, which lead many to speculate that Ellis System Industries was involved in its design and/or construction. There are also railguns mounted above and below each engine output, of unknown classification and yield.

The armor encasing the ship is estimated to have a resiliency far exceeding most other cruisers. It appears to be made largely of an alloy containing either tungsten or titanium, or perhaps both, along with smaller sections of silicon carbide, graphene, and nanotube fibers of unknown composition.

The reason for the speculation and some open-ended question as to Virtue’s exact construction and capabilities, is due to rapid yet widespread misinformation on the com-net. The vehicle specifications and many details of its potential capabilities were posted for public consumption, credited to the name Lilith, from the Saturn local net. Yet, from various territories, multiple posts from the Solar Consortium were made that conflict with Lilith’s information. Many pundits took quickly to discussing the ship and its mysteries, which only served to further obscure public perception about what is true and what is false about Unyielding Virtue.

As of this writing, no one in the Solar Consortium returned any public queries for comments about the vessel’s design and purpose.