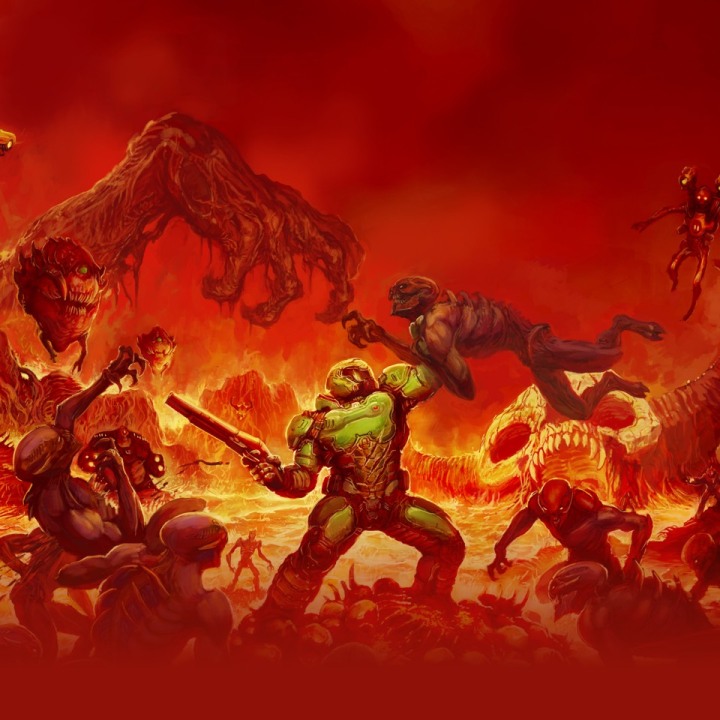 This is an updated version of my review that was originally posted on The Uncommon Geek.

Should this have been called DOOM: Forever? It took almost as long for this title to see the light of day as Duke Nukem: Forever did; fortunately, this game turned out to be a good.

It was fortuitous that what became the game I’m reviewing was stuck in Hell—development hell, of course—so that the fine folks at id Software would have a chance to realize that what was at the time going to be DOOM 4 was too much like Call of Cod Fishing or whatever it is that kids play these days. With a fresh start and new development after 2011, DOOM (2016) was unleashed then upon us with a furious vengeance.

DOOM (2016) is a remake (not a reboot, because we’re not restarting the first game to its original state), much like DOOM 3 was a reimagining of the original story. The setting and story here at times feels like it could tie into the third game, aided by the UAC Mars base having a similar aesthetic and vibe to Mars City in DOOM 3. Regardless of whether it can be made to tie into the other titles canonically or not, this game rocks hard, and works well as both a standalone title and as a proud addition to the franchise as a whole. Whether you prefer to head-canon this game into the rest of the DOOM chronology or you don’t care, you will still be able to enjoy this game. I only wish that id had stuck with DOOM 4 as a title, because now for someone to know which game you’re talking about you have to keep adding the (2016) tag. Game developers and filmmakers alike, how about not using exactly the same title as something that came before, please?

DOOM (2016) is an unapologetic slaughterfest of relentless carnage, over-the-top gunplay and a merciless sense of speed. The game runs at a constant 60 FPS even in the thick of the action, with impressive visual details and effects. The environments are not as destructive as I’d hoped for (mostly you can only destroy the classic exploding barrels) but you’ll seldom have time to care as you’re running and gunning against the demon horde.

While at first I found this odd, this DOOM frequently locks you down in areas of the map until you clear out a host of enemies, not unlike an improvised arena. I initially missed being able to draw enemies out and use other areas of the map as fallback points like in the classic games, but then as I understood more of this new game’s design, I began to love the twist. Here, you don’t regenerate health on your own; cowering or hiding or just generally not moving enough leads to a quick death and a trip to the loading screen. You have to fight to survive, so by frequently locking you down with the enemy with the only escape being by killing them all, the game forces you to be aggressive. This to me is incredibly refreshing and feels like a direct punch in the face to the endlessly repeated and done-to-death mechanics of Cod Fishing and Halo. (I do enjoy the classic Halo trilogy and Reach but the regenerating health mechanics and stop and pop gameplay have been done to death and then some.

The push to fight is aided by a glorious selection of weapons, some of which are old favorites, others are DOOM-flavored versions of weapons we’ve seen before in other media. Even as they come, the guns are satisfying and interesting, while being well balanced against each other. However, the juicy part is that most of the weapons have two different mods that add a secondary firing option, further increasing their utility. On top of that, there are weapon masteries, equipment, and runes that provide bonus abilities and boosts to the DOOM Slayer’s already impressive badassery.

I loved almost every moment of this new DOOM’s awesome campaign, a blood-soaked 12 to 13 hour ride of acrobatic, adrenaline-fueled combat against the forces of Hell, tempered by interesting, pseudo non-linear level design and exploration inspired by classic FPS games. The soundtrack was also intense and perfectly fit the mood of the game, with a combination of gothic atmosphere and death metal. Mick Gordon is a frakking boss and the magic he worked with the game’s score is already the stuff of legend. Overall, I came away from the campaign feeling like I had just played the best parts of classic DOOM, Quake, and Unreal Tournament.

I would probably have been happy with just the campaign and its punch in the face to modern first-person shooters, but this game does of course have multiplayer. After my original review, I have played the multiplayer extensively (almost made it Echelon XI at this point!) and it has been fairly heavily updated by id for balance and ease of play. It still can be frustrating, especially when forced to confront a player demon, but it is a fun, energetic throwback to classic arena multiplayer that only comes a few short steps away from matching classics like Unreal Tournament and Quake: Arena.

The third aspect to this package, and not an inconsiderable one, is the SnapMap feature. As soon as I saw this in id’s big E3 reveal, I thought, “ah-ha! They’ve resurrected the map editor from TimeSplitters!” Does no one remember TimeSplitters? The gaming industry seems to have forgotten it, at least…

SnapMap is a map and game editor that, while not as open-ended and powerful as making your own DOOMWads in the classic games, lets you quickly and painlessly piece together custom maps and game types that you can play solo, in co-op, or in multiplayer deathmatch. At launch there were already lots of interesting creations available, with the predicted bevy of horde/zombie/survival gametypes as well as classic map remakes. By this point the sheer variety and creativity unleashed by this mode is staggering and impressive; unfortunately as of this writing it doesn’t look like SnapMap is coming back for DOOM: Eternal.

Overall, I consider DOOM (2016) to have been a fresh kick in the ass for a gaming world that sorely needed it, and still does in some ways. Fortunately that’s where Eternal is going to step in. Up to this point I still think DOOM (2016) is the best game I’ve played in this generation. The only negative things I take away from my review is the lack of a true manual save system, and not enough classic modes for multiplayer.