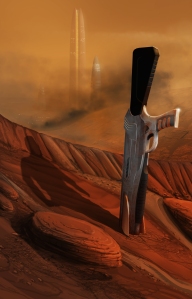 I have been stagnant in updating this blog again, largely in part to having a couple of wisdom teeth pulled. Recovering from that has drained much of my energy, particularly of a creative nature. I’ve spent much of my time either sleeping, or wishing I was sleeping.

But in the midst of this, and the highly distracting pain leading up to the procedure, I was able to have a new cover made for my second After Terra novel, In the Baron’s Shadow, by the talented Jon Hrubesch. Now that there is a proper cover for this book, I have arranged for the print-on-demand version to be made available through Amazon. It’s exciting to now be able to offer both of my published books in digital and dead paper format.

I’m still not fully comfortable revisiting Baron’s Shadow, and I’m not sure if I ever will be, because of the time in my life it represents. However, I did take the opportunity to make some important updates to what I now consider the second edition:

Fixed a few unfortunate typos that made it past initial screening and Amazon’s spellcheck (misspelled words in italics are harder to catch by eye, I’ve noticed).

Cleaned up a few instances of sloppy POV in the beginning.

Added some more activity for one of the new characters, who unintentionally seemed left in the background in a few key moments.

I don’t believe in retconning, and once a story is published I am not going to change the plot or characterization. However, getting the chance to add more content for readers, that adds more context or more development for the story and characters, I am all for it. It’s not something I am going to make a habit of, after all the story should be as “done” as possible before you hit publish. This novel was released on impulse, on an arbitrary deadline that I forced myself into. My discomfort with working on it also meant that some things were left on the cutting room floor that shouldn’t have been. My next novels will be much more “complete” upon release.

Thanks to everyone who follows me and has supported my work so far. The adventures are only beginning.